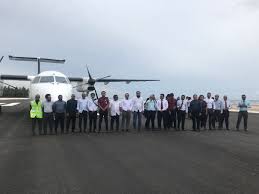 “When this airport opens, this region will become the most valuable in Maldives tourism,” Zameer told reporters on the tarmac.

The 2.2 kilometre-long, 40 metre-wide runway is complete and scheduled flights would begin in September once the airport tower and terminal are ready, he said. The runway can accommodate the Airbus A320 and Boeing 737.

President Abdulla Yameen called the airport a “gift” from the United Arab Emirates, which financed the project with a US$60 million grant from the Abu Dhabi Fund.

An agreement was signed with the Abu Dhabi Fund in December to develop Noonu atoll as an ultra-luxury tourism zone, including the airport project and a city hotel in Maafaru.

The president visited the oil-rich Gulf kingdom in October to discuss investments, after which the fourth annual Maldives Investment Forum was held in the UAE last December.

The UAE is also the Maldives’ top trading partner.